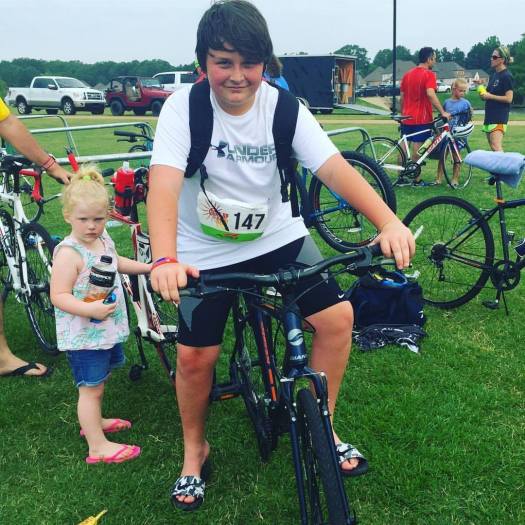 My boy completed his first triathlon this weekend.

When he started training, I thought that the highlight for him would be the sense of accomplishment that comes with finishing with his family and friends cheering him on. (Also, possibly, that the t-shirt could serve as a pretty effective chick magnet, although he would never admit that to me.)

It turns out, though, that what Hunter enjoyed the most was the time he spent talking to a brave, unassuming grandmother during his least favorite segment – the run.

Like my boy, this grandmother said she was completing her first triathlon, and she was doing it in honor of her grandson, Ryan LaSource, who died of leukemia in June 2016, when he was just three years old.

My son said they talked throughout a big part of the run/walk. She was tired. He was tired. They both had a little something to prove to themselves. This woman, who I didn’t have the opportunity to talk to myself, apparently kept telling Hunter how amazing she thought he was for trying something so hard when he is only 12. Hunter thought she was pretty amazing, too.

“People who aren’t your family just don’t say that to you very much – that you are amazing,” my son told me after. “This lady, she was just so awesome. I hope she knows it.”

Hunter’s words got me thinking: we don’t tell each other how awesome we are enough. Some days, maybe we are doing something easily regarded as tough – like finishing a triathlon. But others days, our triathlon might just be getting out of bed and trying again after facing failure or loss or heartbreak the day before. Sometimes, maybe our triathlon is being kind when others have been less than kind to us.

I need to tell people they are awesome more. I bet most of us do.

Another thing that Hunter’s experience is teaching me anew is that tweens and teens especially need to hear how great they are – and they need to hear it from adults who aren’t part of their immediate family.

One of the things that surprises me most about my 12 and 13-year-old is how much they need and enjoy the adults in their lives. And I think they especially need adult fans that they meet on their own, apart from our family. (This is where teachers and coaches and librarians and volunteer coordinators come in.)

This can be a challenge, if we are honest.

Most adults are pretty comfortable talking to young children. After all, they are often cute and cuddly and not at all judging our shoes, weight or makeup.

Tweens and teens, for most of us, can be a little terrifying. I think that we assume that they are hipper than us – that we couldn’t possibly have much to say that they would appreciate.

We assume that they aren’t interested in what we say, and that what they really want is the approval and company of their peers.

And yet, at least with my two and their friends, I’m not finding that to be true. I think what I see, instead, is that they long for the companionship and reassurance of other adults – adults who tell them they are awesome when they aren’t beholden to feel that way because of family bonds. They need to hear, from people who already know about being an adult, that they are on the right track – that they are going to be OK.

This age is brutal, if we are honest. There are the hormones, messing with emotions and throwing the actual chemical balance of the brain off kilter. They have to deal with throngs of other equally off kilter, confused, moody young people, all within the puzzling confines of school systems and sports teams, and even through near-constant texting and social media exchanges (which parents should work to limit, although that’s a post for another day.) Even the most seemingly confident, attractive and talented young people are, deep down, a bit of an emotional, confused, moody mess.

It’s absolutely the worst possible time for the adults in their lives to step back and leave them to their own devices. It’s also the absolute worst time for their community of adults to retreat, assuming that they no longer have anything to contribute.

Teens and tweens can be uncomfortable in their interactions, and they can make us feel that way, too. For some of us, we might still have our own pubescent issues lurking just below the surface, unresolved.

I don’t know if the grandmother who talked to Hunter during his triathlon had any initial discomfort when she started talking to my boy. But I know that her words and example made a huge impact on him – and are something that he will never forget.

While I am trying to be the best parent I can be, I hope that other adults also will push through any discomfort, give an encouraging word, share a story or an insight. And me, I will be pushing to do the same with the young people I am lucky enough to know.